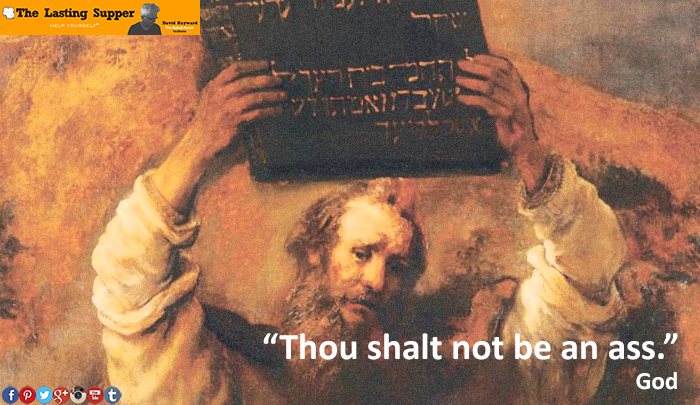 Hearing that Jesus had silenced the Sadducees when they were banging on about who would be married to whom after the resurrection, the Pharisees got together (both groups liked nothing better than to test Jesus, except for their dogma that is), one of the Pharisees, an expert in the law, chose this question to test him with:
“Teacher, which is the greatest commandment in the Law?”

Jesus is most likely to have inwardly facepalmed at this point, (and also headdesked (and probably swore a bit too)), but outwardly, he replied:

As a reminder, these are the original commandments the religious leaders were referring to:

While many may not have a god to love with all their hearts, souls, and minds (religious fundamentalists have a lot to answer for. And anyway, Science), many have morals that are just common sense.
Which is why the latter part of Jesus’ answer became known as The Golden Rule.

Let’s look at these original commandments with the eyes of those who don’t believe there’s a god, as well as from a more modern point of view, shall we?

1 becomes moot.
2 takes on a different meaning. Anyone who’s enslaved in any way to something that doesn’t serve their bodies and minds any purpose is bowing to a false a idol.
3 is pretty much moot.
4 becomes a desire to have one day off from work a week. One is not too much ask from your boss, surely.
5 stands. But only if your father and mother didn’t suck. If they did, then it’s better for the kid of sucky parents to deal with it as soon as they can, and so set their own selves free.
6 stands. Murder is bad. People with common sense know this. Radical Islamists, Zionists, Christians – not so much.
And when we say “murder”, we’re not talking abortion. Abortion isn’t a pleasant thought, but removing a bunch of cells before a foetus is “viable” is not akin to murder.
7 stands. Adultery, if the couple haven’t agreed to polyamory, polygamy, or an open relationship, is betrayal. And betrayal is never nice, in any form.
8 stands. Don’t steal from people – it’s not loving.
9 stands. Don’t lie about people, for whatever reason. Lies are horrible, and very damaging.
10 stands. Coveting doesn’t mean just wanting the same things the Jones’ have. It means wanting to take what the Jones’ have away from them, at any cost.

So, there actually are some commandments left from the originals that still stand the test of time.
But here are another 10, written with a more modern slant:

1. Be open-minded and be willing to alter your beliefs with new evidence.
2. Strive to understand what is most likely to be true, not to believe what you wish to be true.
3. The scientific method is the most reliable way of understanding the natural world.
4. Every person has the right to control of their body.
5. God is not necessary to be a good person or to live a full and meaningful life.
6. Be mindful of the consequences of all your actions and recognise that you must take responsibility for them.
7. Treat others as you would want them to treat you, and can reasonably expect them to want to be treated. Think about their perspective.
8. We have the responsibility to consider others, including future generations.
9. There is no one right way to live.
10. Leave the world a better place than you found it.

This last set of 10 commandments were published by a couple of atheist authors in a book they co-wrote, following a global contest that received 2,800 submissions from 18 different countries and offered a $10,000 reward.
You can read more about that here

What do you think? Would you add any? Take any away?

Do you think The Golden Rule covers them all?

P.S. If god hated gays as much as Right Wing Christianity would have us believe, wouldn’t he have made that a commandment too? 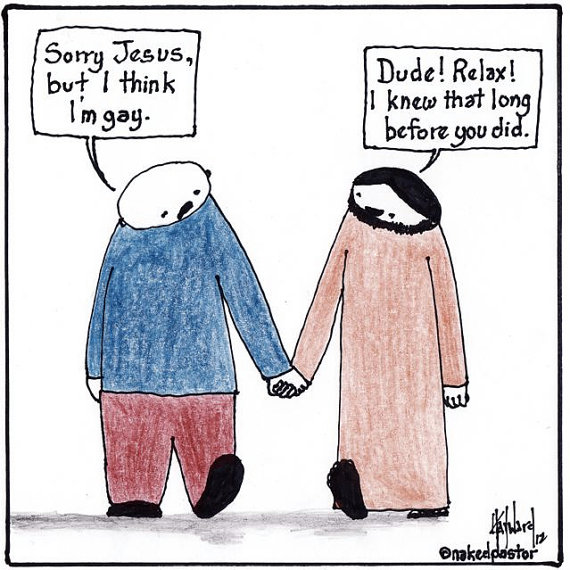 If you’d like to own all of my Sophia drawings, which include the story behind each one, you can buy my book, The Liberation of Sophia here

Like what you’ve read? Join The Lasting Supper now!